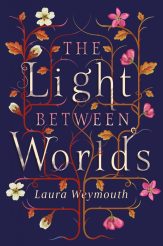 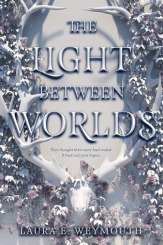 On October 23rd, The Light Between Worlds by Laura E. Weymouth hit shelves and I am so excited for you to all read it! If you have heard absolutely nothing about this lovely book, I am going to be sharing my non-spoiler thoughts on this book and hopefully, by the end, you will want to pick it up too!

The Light Between Worlds is a YA magical realism story following three siblings who during the bombing of London in 1940, are somehow transported to a magical kingdom called the Woodlands. This is a place of nature and beauty, but the Woodlands is facing a battle of their own. The siblings vow to help them as much as they can in this war, but in return, ask to be sent home afterwards as if no time has passed at all.

Six years later, it is time for the siblings to finally go home and instantly, they are faced with a brand new battle of their very own. Their internal struggles as they try to adjust to life away from the Woodlands and back into a reality untouched by magic. It is easier for the two oldest siblings, Jamie and Philippa, but Evelyn struggles with making this world home again. When Evelyn disappears one day, Philippa must return to England after studying in America to unravel the mystery of her sister’s disappearance, and the struggles Evelyn faced while she was away.

This book is haunting and whimsical, transporting me into the world of the Woodlands and London post World War II. Despite reading it twice already, I easily found myself losing track of time while reading it, always finding myself pages ahead of where I originally thought. Taking place in 1940s-50s England, the atmosphere created was the definition of coziness; rainy, grey, and chilly. It was the perfect book to snuggle up with on a rainy day and some hot tea and just fall into for a few hours. This world really does take you by surprise with how vivid it is. I could see the trees of the forests standing tall in the Woodlands and the gardens outside the school Evelyn goes to when memories of the Woodlands attack her heart the most.

While this book has fantasy elements in it like the magic of the Woodlands, this book is less about the fantasy and more about finding yourself and coping in the meantime. Because of that, it is very character based, following the story and relationship of the two sisters, Evelyn and Philippa, both who are strong women but also have their own demons and ghosts to face. We learn how they both cope with them, and those are two very different ways that were not the healthiest. This made for a realistic aspect of the novel because often, people cannot find the best ways to cope with loss or the feeling of not belonging. Instead, they resort to other methods and that was a heavy theme woven into this book.

The other characters in this book played a big part in that theme of not always choosing the healthiest ways to cope which is a reality, especially in the modern world today, and listening to the truth beating in your heart and bones. Evelyn juggled with her emotions and thoughts this entire book, knowing she belonged in the Woodlands but sometimes, something, or someone, held her back from listening to that. But, it was never something the other person did knowingly, like Tom. Tom was the love interest for Evelyn and played an important role in this story. That role being the unveiling that sometimes a person’s problems cannot be solved by anyone other than that person themselves. A person is not a project; a jumbled mess of broken bits needed to be fixed, but an art piece that is slowly coming together on its own time.

Lately, mental illness has been something I’ve become more aware of and I noticed this book represented eating disorders and also depression. These were the reasons the characters had coping mechanisms, as one cannot leave a magical world and return to an ordinary one without fault. Nothing is graphic, but it is good to keep in mind when reading it in case you are easily triggered. On Laura E. Weymouth’s website, she goes into more detail about these triggers so make sure you check that out here.

Overall, this book was a cozy fantasy that I can definitely see myself picking for a third time in the future. I highly recommend it for fans of Narnia because it is very similar to that story-wise, however, different because Narnia is for younger readers while this novel is definitely for young adults. After debating it after my second read, I have decided to give The Light Between Worlds a 4.5/5 stars as it was a beautiful and gripping read that holds my interest every time.

Those are my non-spoiler thoughts on The Light Between Worlds by Laura E. Weymouth and I hope you enjoyed! Make sure to let me know if you decide to pick this book up and what your thoughts are on it! Also, don’t forget to check out my last blog post, as well as my social media accounts all linked down below. Thanks 🙂

My Tweets
Join 1,095 other subscribers