October came and went in the blink of an eye, and now November is only days away which is crazy! I am extremely excited for my November TBR this year though because it is full of books preparing me for my most anticipated book release of the year: Queen of Air and Darkness by Cassandra Clare! Anyways, let’s get into this TBR and talk about all the books I plan on reading in November, which is also the month of NaNoWriMo…

In preparation for Queen of Air and Darkness, the third and final book in the Dark Artifices series, I need to re-read the first two books. I believe I have re-read this book once and I would have re-read it a million more times than that if I could because of how amazing it is, but this is no small book. It is almost 700 pages and I do not have the TIME to sit down and read 700 pages (two 700 paged books) this month…but I am going to anyways. Lady Midnight follows a race of half-humans and half-angels called Shadowhunters, whose mandate is to protect the world and humans from demons. In this book, we follow a large and AMAZING cast of characters who are Shadowhunters and after bodies murdered in the same way one of our main character’s, Emma Carstairs, parents were, start surfacing, she puts it on herself to find the murderer. This book has romance, action, kick-ass heroines (and heroes), and a beautiful family dynamic so I cannot wait to re-read it and re-visit this world and the characters!

Lord of Shadows by Cassandra Clare 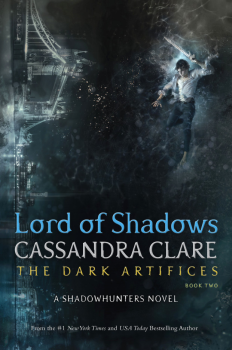 I do not believe I have had the chance to re-read Lord of Shadows, so I am especially excited to pick this one up again. It is the second book in the trilogy and honestly, I only remember the key points in the story since I read it over a year ago. However, I do remember it having a lot more of my two favourite characters (Christina and Mark!!!), so again, very excited about that.

While I was planning on listening to the Ruby Red audiobook in October, and then the second book, Sapphire Blue in November, I just ended up listening to Ruby Red and Sapphire Blue a lot faster than anticipated! This is great because I need to read more books every month because I am so close to my 75 books in one-year goal! Anyways, Emerald Green is the third and final book in this YA time-traveling trilogy that follows our main character, Gwen, who lives in a family that possesses a time-traveling gene. Her entire life, it was her cousin, Charlotte who was believed to have the gene, but when Gwen suddenly travels back in time she becomes part of a world she thought she had escaped. I love this trilogy and I love listening to the audiobooks so I am very excited to listen to this on the bus and when I am just walking around!

This the second audiobook I plan on listening to this month because since I am wanting to read to monstrously sized books, I am going to want to take a break and just listen to some stories as well. I have also been making my way through The Mortal Instruments series via audiobook as I finished City of Fallen Angels last month, so I am looking forward to continuing on! This is the fifth book in the series that also follows characters who are mostly Shadowhunters, give or take a few vampires and werewolves. After our main character, Clary’s mother is kidnapped in the first book, she is suddenly thrust into a world of demons and angels to get her mother back, and along the way, realizes she has a large part in this world than she thought.

Okay, so those are the four main books I want to get to in the month of November which is going to be a struggle. November is always a very, very busy and stressful month because it is when lots of projects and essays for school are due, and it is also National Novel Writing Month! However, I have been on a reading roll lately so I am sure I will find the time. I also only plan on reading two physical books and two audiobooks of my own choice because I know I will be assigned some reading in English and I don’t want to put too much on myself!

Anyways, I hope you enjoyed this November TBR and make sure you comment the books you plan on reading this coming month because I’d love to know! Also, don’t forget to check out my last blog post, as well as my social media accounts for more bookish and writing related content below 🙂