Imagine this: curling up in bed with a hot steaming cup of coffee or tea with a stack of books at hand. Doesn’t this sound amazing? Well if it does, then definitely keep reading for a lot of bingeable recommendations!

The Heroes of Olympus series by Rick Riordan

Obviously you have to read the Percy Jackson and the Olympians series before reading this one, but if you already have then you need to pick this series up. The Heroes of Olympus series follows a group of demigods who band together to defeat the all powerful, Gaia, or who is better known as Mother Earth. There are five books and they are The Lost Hero, The Son of Neptune, The Mark of Athena, The House of Hades and The Blood of Olympus. These books include a wonderful cast of characters and pages upon pages of epic quests and fight scenes. 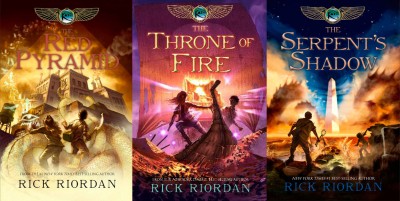 Yep, more Rick Riordan because his series are so much fun to read in a binge session. While Percy Jackson and the Olympians, and the Heroes of Olympus are influenced by Greek and Roman mythology, the Kane Chronicles is influenced by Egyptian mythology. It follows two siblings, Carter and Sadie, whose father disappears in a grand scheme to steal a valuable item from a museum. Later they learn that they are tied to the Egyptian world of gods and monsters, and that their father’s disappearance has to do with it. This series does not get a lot of credit for how good and fun it is, so when I see a chance I have to recommend it!

The Wrath and the Dawn duology by Renee Ahdieh 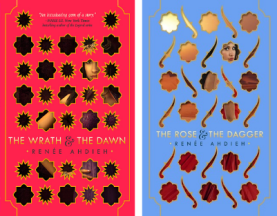 Yes, yes, this isn’t a series but it is a fantastic duology that everyone needs to read. It twists around with the Arabian story of One Thousand and One Arabian Nights and it is filled with action, suspense and swoon worthy moments. I currently have not read the companion to the first book, which is the Rose and the Dagger, but I am getting it in the mail today so I will jump into it as soon as possible!

Shatter Me trilogy by Tahereh Mafi

This is a trilogy where you pick up the first book and then immediately after you finish you want to pick up the other two books. But wait…this trilogy isn’t going to be a trilogy for long because Tahereh Mafi announced that she is adding two more books to this addicting series! This means you have time to catch up. The first book follows a girl named Juliette who has been locked up in a cell for almost a year but eventually breaks out with the help of an unusual friend. She soon realizes her breakout was more than she assumed and suddenly her whole life is flipped upside down. Love, love, love these books and definitely recommend them!

Anna and the French Kiss trilogy by Stephanie Perkins

I know, this isn’t really a trilogy but while the books follow completely different characters with each book, they do intertwine eventually. The three books are Anna and the French Kiss, Lola and the Boy Next Door, and Isla and the Happily Ever After. This is a contemporary trilogy and each book is different so I won’t go into too much deal other than say that there are heart throbbing romances and heart shattering heart breaks!

Those are all the bingeable series I have for you today and I hope you enjoyed.

How to achieve organic growth on Instagram NOW! ⭐️
Are you a brand new social media manager or interested in becoming one? 🤔
💰 HOW I PRICE MY PACKAGES AND DON'T UNDERSELL MYSELF 💰
Are you a new freelancer or thinking of becoming a freelancer?⠀⠀⠀⠀⠀⠀⠀⠀⠀