There are a LOT of books out there that annoy me and get on my nerves so I decided why not make a blog post of it and share with you all those books? 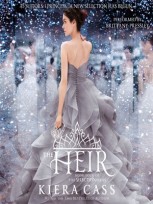 The Heir by Kiera Cass – When I think of books that get on my nerves, this is the first book that comes to mind. If you didn’t know, The Heir is a continuation of the Selection series and in my opinion, is a continuation that was not needed. The first three books in the Selection series were great, but they had to ruin it with this book! The Heir is a sequel that takes place 20ish years after the events of The One, and follows America and Maxon’s daughter Eadlyn who is of age and has to hold a selection to find “the one”. I enjoyed seeing America and Maxon again, but there daughter, Eadlyn is such a hard character to like! She is whiny, inconsiderate and incredibly selfish, and is in no way a relatable character. I honestly felt this book was unnecessary and I am sure there are a lot of people out there who agree!

but overall it did have some very frustrating moments! Lady Midnight follows two shadowhunters named Emma and Julian who live in a world of demons, magic and fighting. Our main characters are the frustrating part and I don’t want to spoil anything for people who haven’t read this book, but if you have you know what I am talking about!

Fangirl by Rainbow Rowell – Again I love Fangirl but our main character is such a stubborn character sometimes that it irritates me. Fangirl follows a girl named Cath who is attending her first year of college with her twin sister, Wren, and while Wren wants to be independent and have fun, Cath is much more shy and reluctant. I do love this book, don’t get me wrong, but sometimes I wanted to scream at Cath to take a risk for once, or just leave her dorm room instead of moping around and letting life pass her!

Prodigy by Marie Lu – I really enjoyed Prodigy but the relationship between our main characters is something I don’t always enjoy. The first book in this trilogy, Legend, follows a teenage criminal named Day and a soldier named June who become an unlikely team as they band together for revenge. I am honestly not a huge fan of June because in my opinion, she is quite a hard person to like and see through her suit of rock hard iron, so I did have some moments were I gritted my teeth during specific scenes.

Those were some books that frustrate me and I hope you enjoyed. Don’t forget to comment some books you find frustrating and also check out my last blog post: February 2017 Wrap Up!

2 thoughts on “Books That Frustrate Me!”